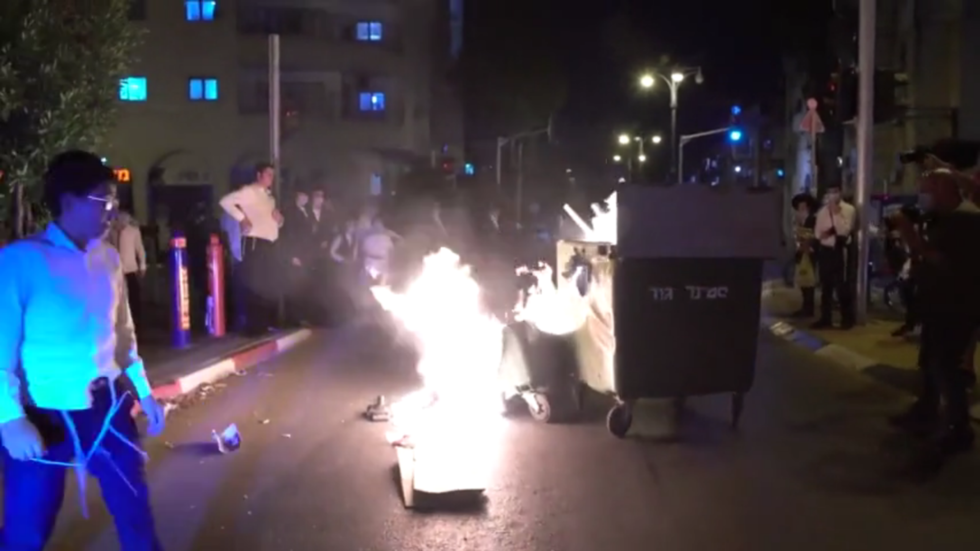 Ultra-Orthodox protesters took to the streets in several Israeli cities to express their anger over the government’s decision to impose a second nationwide lockdown, which interfered with Jewish New Year celebrations.

Residents of Jerusalem and Bnei Brak rallied on Sunday against the strict three-week quarantine, which began on the eve of Rosh Hashanah. The measures, purportedly put in place to stop the spread of coronavirus, prohibit Israelis from traveling more than one kilometer (0.6 miles) from their homes – a restriction that irked many who planned to celebrate the Jewish holiday with family.

In Bnei Brak, demonstrators marched through the streets and set a dumpster on fire. Some of the protesters reportedly called police “Nazis.” Law enforcement arrested one individual for allegedly disturbing public order, local media reported.

A leading member of the ultra-Orthodox community in the city told the Times of Israel that the “protest is meant to express the feeling of pain in the face of the lockdown’s destructive consequences, which harm religious institutions, the economy and the well-being of residents.”

Hundreds of people also protested in an ultra-Orthodox neighborhood of Jerusalem.

Several thousand protesters also gathered outside Prime Minister Benjamin Netanyahu’s home on Sunday evening. One person was arrested after reportedly driving his car toward a police barricade. Police pulled the individual from the vehicle before restraining him.

Although all non-essential activity is banned under the lockdown, protests are still allowed if they follow social distancing rules. Many Israelis reportedly traveled during the holiday weekend under the guise of attending protests.

Israel has seen a spike in new coronavirus cases, but daily deaths remain low. In total, the country has registered 188,000 Covid-19 cases, resulting in 1,256 fatalities since the start of the pandemic.

The Israeli government claims the second lockdown is necessary to avoid a serious health crisis. Netanyahu’s critics have accused the scandal-plagued prime minister of using the pandemic to distract from his falling political support and corruption trial.