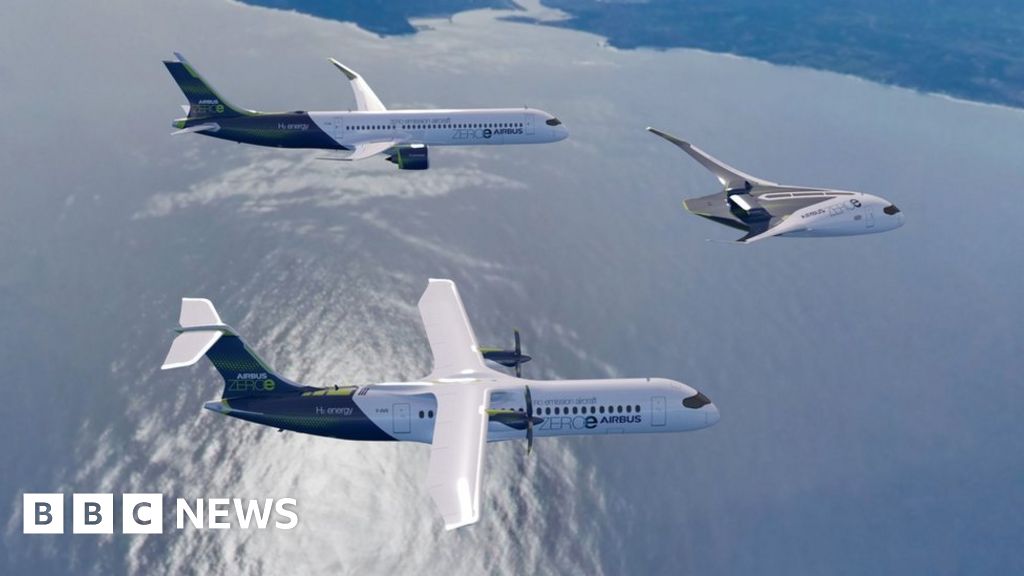 Aerospace giant Airbus has unveiled plans for what it hailed as the first commercial zero-emission aircraft.

It said its hydrogen-fuelled passenger planes could be in service by 2035.

The use of hydrogen had “the potential to significantly reduce aviation’s climate impact”, he added.

However, analysts point out that it is not the first time that hydrogen has been touted as the saviour of modern air travel.

The history of the fuel in aviation goes back to the days of airships in the early 20th Century, but the Hindenburg disaster in 1937 brought that era to an end.

More recently, from 2000 to 2002, Airbus was involved in the EU-funded Cryoplane project, which studied the feasibility of a liquid hydrogen-fuelled aircraft.

After that, the idea fell out of favour again – until now.

Unveiling its latest blueprints, Airbus said its turbofan design could carry up to 200 passengers more than 2,000 miles, while a turboprop concept would have a 50% lower capacity and range.

A third, “blended-wing body” aircraft was the most eye-catching of the three designs.

All three planes would be powered by gas-turbine engines modified to burn liquid hydrogen, and through hydrogen fuel cells to create electrical power.

However, Airbus admitted that for the idea to work, airports would have to invest large sums of money in refuelling infrastructure.

“The transition to hydrogen, as the primary power source for these concept planes, will require decisive action from the entire aviation ecosystem,” said Mr Faury.

“Together with the support from government and industrial partners, we can rise up to this challenge to scale up renewable energy and hydrogen for the sustainable future of the aviation industry.”

The new Airbus designs are the fruit of a joint research project that Airbus launched with EasyJet last year to consider hybrid and electric aircraft.

The airline’s chief executive, Johan Lundgren, said: “EasyJet remains absolutely committed to more sustainable flying and we know that technology is where the answer lies for the industry.”