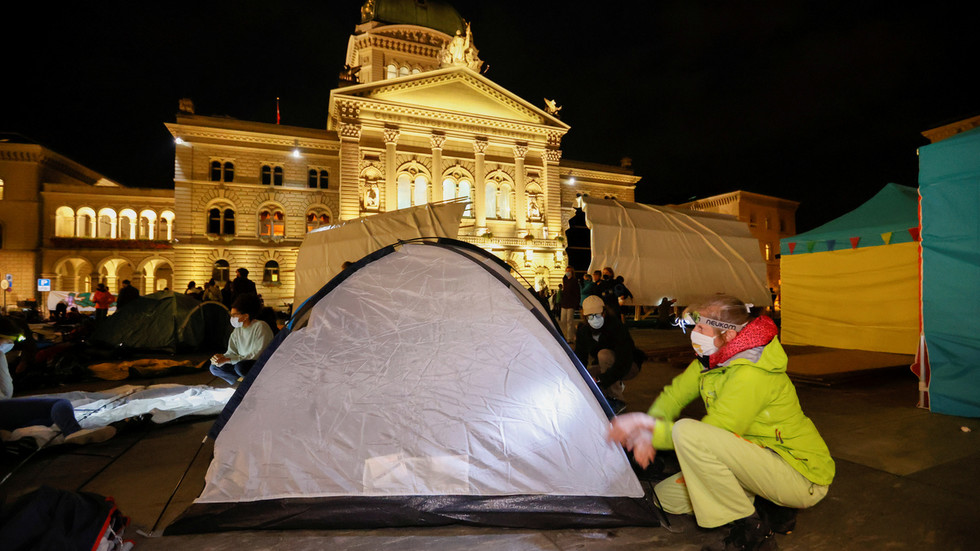 Several hundred demonstrators have moved into a square near the Swiss parliament building in Bern to demand government action on climate change. Police are monitoring the situation.

The protesters marched to Federal Square in the early hours of Monday and began setting up camp. Photographs show the activists constructing tents, with one group of demonstrators seen sleeping next to a row boat. Of the estimated 400 people participating in the demonstration, around 40 are said to have chained themselves to objects in order to prevent police from clearing them from the square.

The climate protest marks the start of “Rise Up for Change” week. A joint statement released by Climate Strike, Collective Climate Justice and Extinction Rebellion accused the Swiss National Bank, headquartered close to the square, of “investing billions of francs in the exploitation of fossil fuels. They are throwing oil on the fire while everything is already burning.”

A spokesperson for the coalition of activist groups said that the demonstrators “demand net zero [carbon emissions] by 2030 and climate justice now.” In a tweet, Rise Up Switzerland said it was occupying the square to “protest against the system that fuels the climate crisis.”

The city has reportedly dispatched police officers to liaison with the group. The government has not yet decided on what action, if any, it will take in response to the camp’s creation, according to reports.