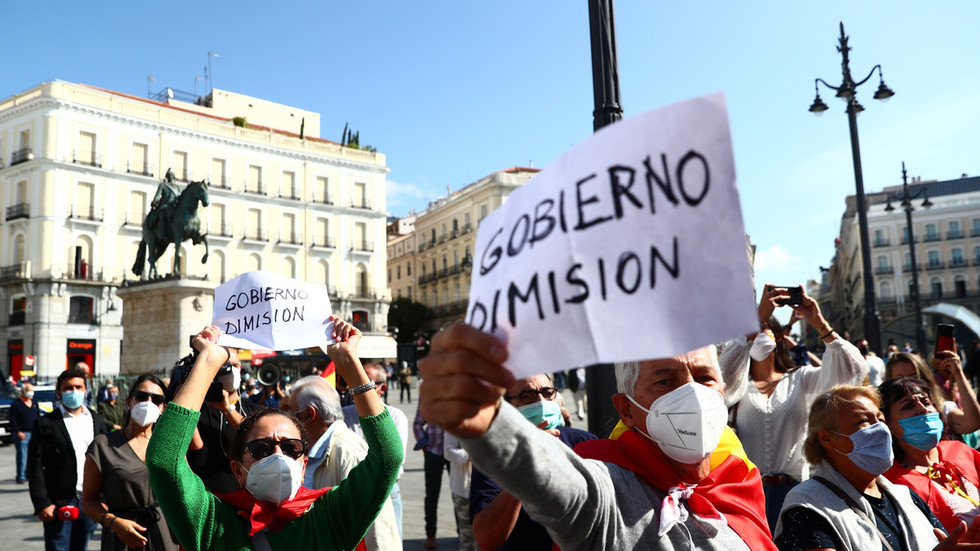 The regional chief of Madrid, Isabel Díaz Ayuso, has requested help from the army to fight the coronavirus surge in and around the city after local authorities ordered a partial lockdown of some poorer areas starting on Monday.

Fears of another lockdown prompted protests in the city over the weekend.

“We need help from the army for disinfection,” Diaz Ayuso told reporters after her emergency meeting with Prime Minister Pedro Sanchez about the coronavirus crisis. The army could also strengthen local police and law enforcement, Diaz Ayuso added, while authorities are trying to bring the spread of the virus under control in Spain’s worst-hit region.

She also requested the government set up makeshift hospitals in the capital again, as the previous facilities were decommissioned three months ago after the number of infections fell in Spain and a strict lockdown was lifted.

At the height of the first wave of the epidemic in March and April, the government deployed thousands of troops to help with the anti-coronavirus effort.

Protesters in some poorer areas of Madrid took to the streets on Sunday complaining of discrimination by the authorities, as lockdown measures predominantly apply to lower income areas with higher immigrant populations. Peaceful protests were held in 12 of the 37 districts affected.

Madrid Mayor Jose Luis Martinez-Almeida disagreed that the measures discriminated against the poor. “There are no first class residents and second class residents,” he tweeted. “We have to be together at this moment.”

Also on rt.com Spain plans to extend furlough scheme into 2021 to guarantee workers part of their income

The capital accounts for a third of all infections in Spain, and authorities announced the restrictions in areas where the contagion levels exceed 1,000 per 100,000 inhabitants.

Police will set up 60 checkpoints to enforce the measures. Fines starting at €600 euro ($710.6) were announced, but they will not be imposed on the first day, according to local officials.

Madrid’s regional health chief, Enrique Ruiz Escudero, said if these measures did not reduce coronavirus cases, a city-wide lockdown could follow. “If it is necessary to shut down Madrid, we will do it,” he said in an interview with ABC newspaper published on Sunday.

Spain has the highest number of Covid-19 cases in Western Europe. However, PM Sanchez ruled out a second national lockdown in an interview on Saturday.