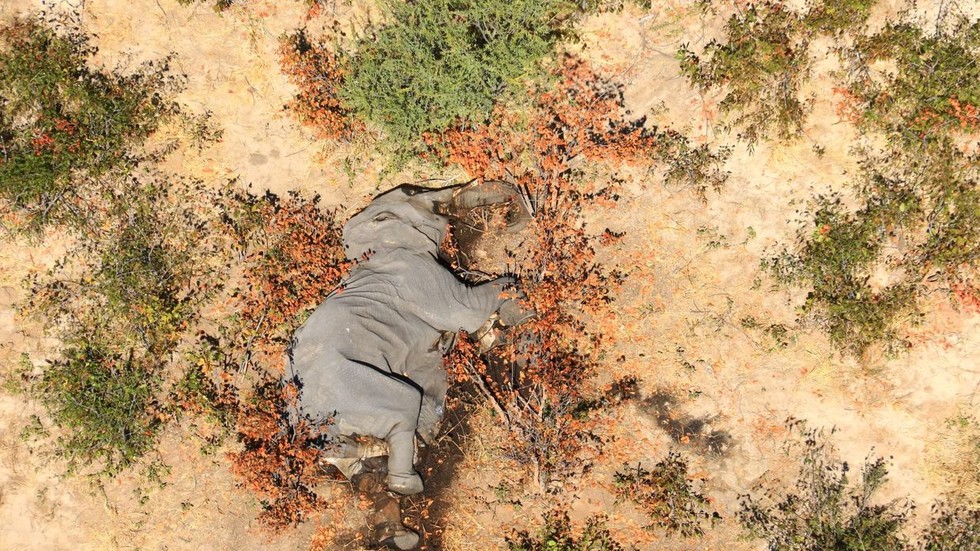 Officials in Botswana claim to have identified the culprit behind the mass die-off of elephants witnessed earlier this year between March and June: cyanobacteria poisoning. However, not everyone’s entirely convinced.

The die-off sparked major concerns among the wildlife conservation community as hundreds of pachyderms dropped dead in Botswana’s Okavango Delta earlier this year. The country boasts the world’s largest elephant population, comprising more than 130,000 animals, over 330 of which have so far died in mysterious circumstances.

Also on rt.com Not poisoned, not poached: Mystery surrounds death of 154 elephants in Botswana

“The deaths were caused by poisoning due to cyanobacteria which was growing in [salt] pans” or watering holes, the principal veterinary officer at the Department of Wildlife and National Parks, Dr Mmadi Reuben, revealed on Monday.

The elephant deaths dropped off near the end of June, as the pans and watering holes dried up and the species of cyanobacteria that produces neurotoxins died.

Tests were conducted in laboratories in South Africa, Canada, Zimbabwe, and the United States, though local officials in Botswana declined to name specific labs or agencies. The same officials vowed to conduct more testing of waterholes for algal blooms ahead of future rainy seasons to prevent similar die-offs from reoccurring.

These kinds of toxins were initially ruled out as the cause of the die-off, as only one other animal, a horse, died in close proximity to watering holes and in similar circumstances to the elephants. Scientists now suspect that prolonged exposure to the cyanobacteria due to bathing and additional drinking time among elephants may explain the discrepancy.

After the Government of Botswana concluded that harmful algal blooms killed hundreds of elephants, it is vital that we understand which algae & toxins are involved. Thanks to everyone who donated to this project, which aims to do just that! @vicfallswildhttps://t.co/Sf8J9PKK90

However, conservationists such as Dr Niall McCann, director of conservation at UK-based charity National Park Rescue, have called for increased research into the algal blooms believed to be responsible so the wildlife community can better protect the pachyderms.

McCann also decried a lack of more thorough testing of the elephant carcasses, which must be done in a highly specific and timely manner, to better narrow down and explain the die-off events.

“Just because cyanobacteria were found in the water that does not prove that the elephants died from exposure to those toxins. Without good samples from dead elephants, all hypotheses are just that: hypotheses,” said McCann, highlighting that correlation doesn’t equal causation, especially if there is to be any real hope of protecting the animals in future.

Meanwhile, more than 20 elephants died across the border in Zimbabwe in August, fuelling concerns the two die-off incidents might be linked. The remains of these animals are undergoing the aforementioned strict and necessary testing to determine their cause of death more accurately.

One leading theory is that they were felled by a strain of a bacteria called pasteurella, which killed hundreds of thousands of Saiga antelope in Kazakhstan in 2015.