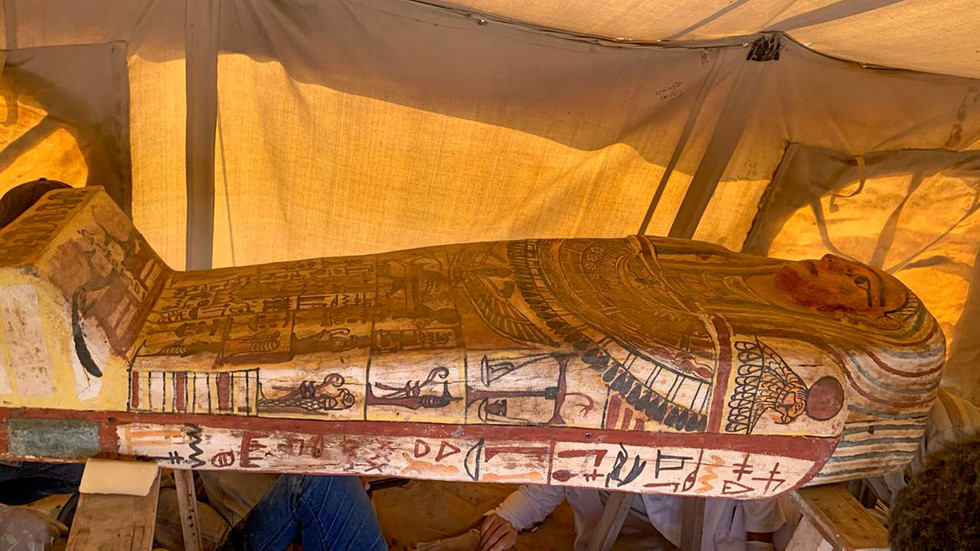 The Egyptian Ministry of Tourism and Antiquities has announced the discovery of an additional 14 immaculately preserved sarcophagi at the Saqqara necropolis south of Cairo, bringing the total number to 27.

According to archaeologists working at the site, the coffins have lain undisturbed for 2,500 years, despite being located just 16km (10 miles) south of the world-famous Giza pyramids.

The most recently found ornately carved and decorated sarcophagi were unearthed during an ongoing archaeological dig near Egypt’s ancient capital, Memphis – a UNESCO World Heritage site and the same place that 13 pristine specimens were discovered last week.

In most cases, the original paint and carvings were still intact on the surface of the coffins. The excavations are continuing and further discoveries are expected, according to Minister of Tourism and Antiquities Dr Khaled Al-Anani.

The owners of the sarcophagi have yet to be identified, but, given the buzz generated in the archaeological community over the finds, it is only a matter of time.

In the meantime, budding Egyptologists have rejoiced at the discovery online – although they are pleading with the authorities not to open the sarcophagi this year, given how harrowing it has already been on a global scale so far.

So this is really cool and all, but please do NOT open any of these. 2020 is challenging enough already! https://t.co/i10TQ3jhIR

Should we *really* be disturbing these? I mean, 2020 is enough trouble already, right? | Egypt tomb: Sarcophagi buried for 2,500 years unearthed in Saqqara https://t.co/XrlIo5nWOW

In July, Egyptian authorities reopened the Giza pyramids and other major historic sites to tourism after a three-month coronavirus-induced closure. Fees for visitors were also waived, in a bid to stimulate one of the country’s major revenue drivers.

Egypt’s tourism sector, previously ailing due to a series of high-profile terrorist attacks and regional instability, drew record visitors of around 13.6 million in 2019, just prior to the global coronavirus pandemic.

There are plans to unveil a new Grand Egyptian Museum in Giza in the coming months, though no formal announcement has been made in this regard yet.