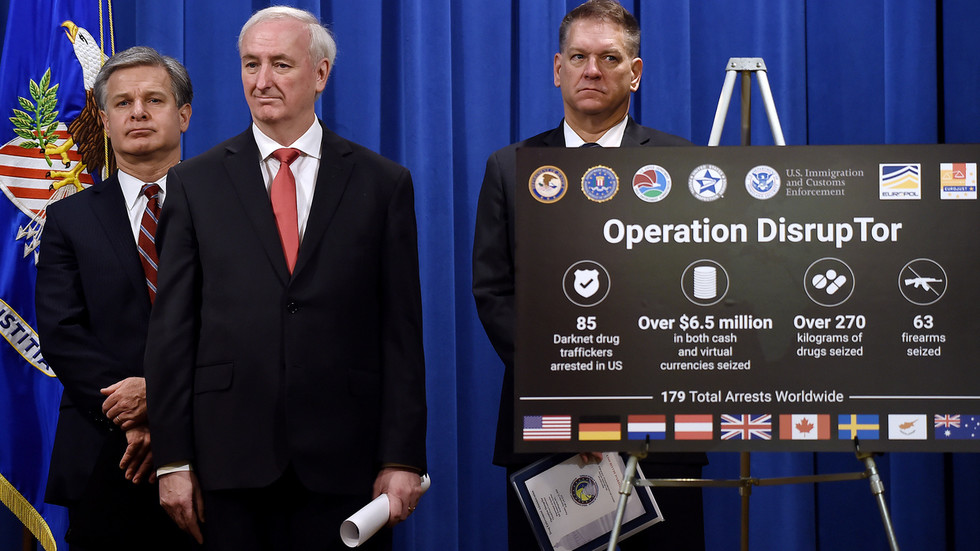 Law enforcement in several countries have arrested 179 people and seized more than $6.5 million in a coordinated operation to tackle opioid trafficking on the darknet, mainly in the US and Europe, American authorities have said.

Dubbed ‘Operation DisrupTor,’ the coordinated action comes more than a year after ‘the Wall Street Market’ – believed to be one of the largest illegal online marketplaces on the darknet – was taken down by authorities in the US and Europe.

A part of the internet hosted within an encrypted network, the darknet is accessible only through specialized anonymity-protecting tools, most notably the Tor browser.

The Joint Criminal Opioid and Darknet Enforcement (JCODE) team of the US Justice Department joined Europol for the operation, which resulted in the seizure of over $6.5 million in cash and virtual currency, and 500kg of drugs in seven countries. In the US, about 275kg of drugs, including fentanyl, heroin, cocaine, ecstasy and other opioids was seized, the Justice Department said on Tuesday.

Law enforcement officers detained 121 suspects in the US, 42 in Germany, eight in the Netherlands, four in the UK, three in Australia and one in Sweden, according to the department.

Head of Europol’s European Cybercrime Centre, Edvardas Sileris, said the operation’s success sent a message to criminals who use the dark web to buy or sell drugs that “the hidden internet is no longer hidden, and your anonymous activity is not anonymous.”

The investigation is ongoing and officials are still working to identify other individuals behind darknet accounts involved in trafficking. “There will be no safe haven for drug dealing in cyberspace,” Deputy Attorney General Jeffrey Rosen warned.

FBI Director Christopher Wray said that “with the spike in opioid-related overdose deaths during the Covid-19 pandemic, we recognize that today’s announcement is important and timely.”