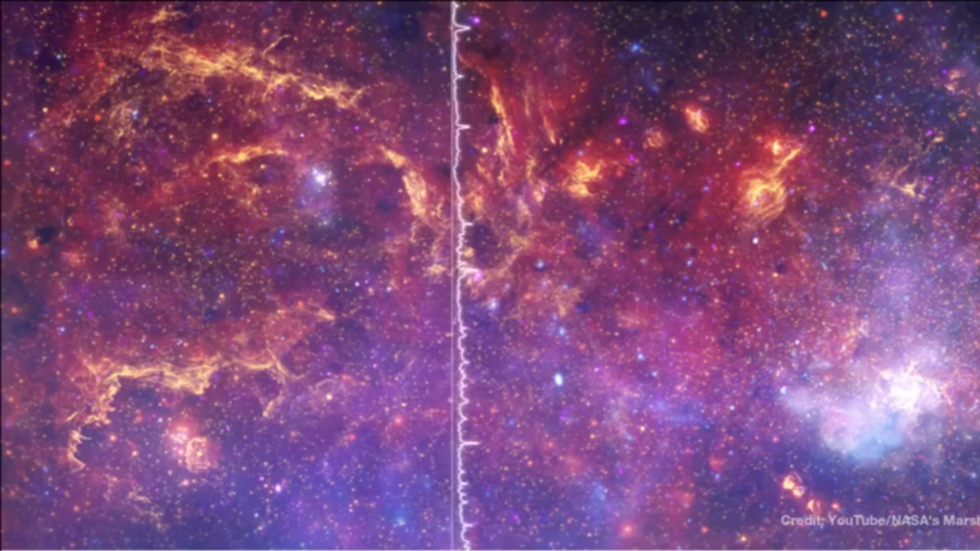 Not content with blowing minds around the world with incredible images of our universe, NASA has taken data from telescopes observing the galactic center of the Milky Way and created a celestial symphony.

NASA regularly takes digital data from distant telescopes and turns them into breathtaking images. These images are composites of various wavelengths of light and radiation that the human eye can’t see.

In an effort to outdo themselves, NASA boffins have taken things to the next level and ‘sonified’ the stars, using this same digital telescope data to create short cosmic concerts.

Sonification is the process by which data, in the form of a binary code or a slew of ones and zeros, is translated into sound rather than imagery.

To contextualize the information, NASA has created these audiovisual delights in which the pitch and volume are controlled by the position and intensity of the stars found in the images of the galactic center.

Stars and individual bright lights are assigned individual notes, while clouds of gas and dust produce the atmospheric drone sounds that evolve as the piece progresses across the images, from left to right.

Naturally, the piece concludes when it hits the four-million-solar-mass black hole Sagittarius A*. The short audio piece covers a region of our galaxy that’s roughly 400 light years across.

Each telescope plays its own ‘instrument’, which is tied to the data it collects.

Hubble encapsulates the energetic regions of the galaxy, where stars are being born, with delicate pizzicato strings.

Spitzer ‘plays’ the ethereal infrared spectrum, belting out the glowing clouds of dust for all to hear.

Last but not least, Chandra ‘sings’ the enchanting X-rays from the ultra-heated gas resulting from supernova explosions.

The project also produced sonified versions of the remnants of the supernova explosion Cassiopeia A and the world-famous image ‘The Pillars of Creation’.