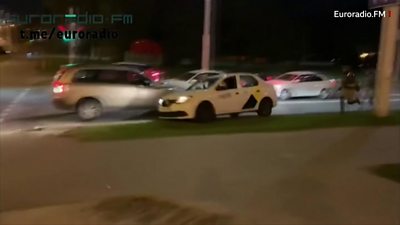 A protester allegedly managed to evade authorities by jumping into a taxi outside Puškinskaja Station in Minsk, the capital of Belarus.

BBC producer Abdujalil Abdurasulov has confirmed that the reporter who filmed this footage for Euroradio in Belarus is safe and that he and his colleague “spent some time lying on the asphalt facing the ground”.

The taxi driver was hailed a hero by protesters on social media.