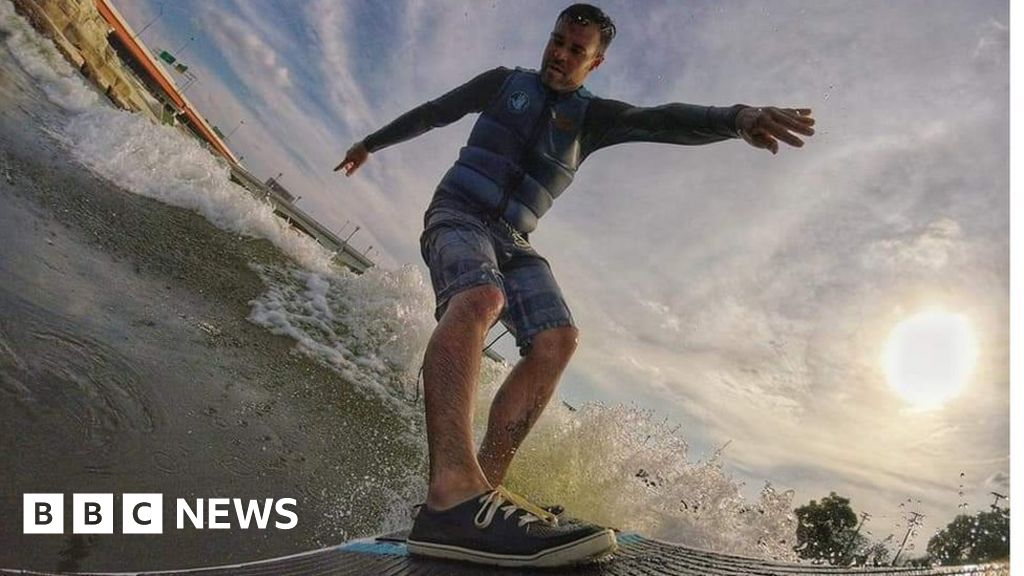 With holidays to beachside destinations scuttled by the pandemic, adventure seekers in America’s Midwest are hitting their local waterways, writes Stephen Starr.

In any year but this, landlocked Ohioans would descend in their thousands on the beaches of the Florida panhandle and the Carolinas for summer vacation. The pandemic, unsurprisingly, has changed all that.

In July, a Covid-19 outbreak in central Ohio was blamed on holidaymakers returning from Florida and Arizona, two states badly affected by the virus this summer. News such as this has forced many to abandon any out-of-state travel plans.

But for locals missing the sea waves, a new community of surfers has this summer sprung up in the most unlikely of places. In Dayton, Ohio, the pandemic has fuelled an emergent river surfing scene that’s drawing adventure seekers down to their local rivers.

On the banks of the Great Miami River in downtown Dayton, Jake Brown is face down on a surfboard, giving instructions to a group of student surfers watching intently.

For seven years, Brown lived in Santa Cruz, California, working as a lifeguard and surfing daily. When he returned home to Ohio – more than 600 miles from the nearest ocean – in 2017, he immediately missed the beach, but especially the surfing scene.

One day while driving in Dayton, Brown was stunned to see someone standing on a surfboard in the middle of the Great Miami River. That fellow surfing fanatic was Shannon Thomas.

Last year, the pair got together to establish Surf Dayton, one of only a handful of river surfing schools in the country.

Booming in the Covid-19 era

In a short time, the business has exploded.

“We did 22 clinics in 2019 (with three or four participants per clinic),” says Thomas, who regularly straps his board to his scooter and hits the river on his lunch break. “This year, we have already done around 64 clinics.”

Surrounded by endlessly flat farmland, Dayton is not a place one might expect to find a booming water sports scene. Today, however, it boasts a tight-knit and growing river surfing community, the water serving as a means to stay active with the beaches of Florida and the Carolinas out of reach for now.

“I’ve lived in both Florida and California. While I tried ocean surfing a few times in Florida, I never quite caught on and honestly, California waves were just too intimidating for me to even attempt,” says Kathleen Hartshorn, who took up river surfing this summer.

“I met Shannon a few years ago. So, when he began teaching lessons, I knew I wanted to try it out.”

Hartshorn says she would normally go to a beach outside Ohio for summer holiday “at least for a few days,” but with many busy coastal towns being Covid-19 hotspots, she’s decided to stay close to home.

“There is just something really magical about seeing people out on the river trying to surf for the first time. Or seeing some of the same people coming out and getting stronger at surfing.”

Sitting at the confluence of the Mad, Stillwater and Great Miami rivers, Dayton finds itself ideally located for fast water action. Two of the white-water features are a half-mile from each other in the downtown area and have separate entry chutes to cater to both skilled and novice water enthusiasts. A third is located four miles upstream on the Mad River.

Help for a hollowed out downtown

Best known as the hometown of the Wright brothers, the Gem City was for decades a hub of innovation.

At the turn of the 19th Century it boasted more patents per capita than any other US city. Thousands of African-American workers migrated here in search of work, boosting the city’s population and manufacturing capacity.

But since the 1960s, Dayton, like dozens of other Midwestern cities, has seen countless factories shutter and residents leave. Many of those who remained moved to sprawling suburbs on the city’s periphery, leaving downtown a sea of shuttered stores and empty office blocks.

But in a move to attract suburbanites and residents of nearby cities (Dayton is an hour’s drive from Cincinnati, and Ohio’s state capital, Columbus) back to the downtown area, community leaders set about raising $4.4 million (£3.37 million) to convert dangerous low head dams, built in the early 20th Century to control flood water, into white-water recreational amenities.

The aim of the project was to attract young people by “providing a vibrant downtown with dynamic recreational opportunities”, says Carrie Scarff, chief of projects and planning at Five Rivers MetroParks, the Dayton area’s main parks organisation.

“Companies would choose to locate where they know they could attract and retain talent for their organisations. So, the intent was to create a downtown where workers could live, work, play, and learn.”

The rivers were also seen as a way to encourage locals to be more active. These efforts appear to be paying off.

“This year I knew of people travelling in from Chicago just to go surfing in Dayton. Those people are staying in Airbnbs, going to restaurants,” says Kathleen Hartshorn’s husband Wes, who took up river surfing last year and has spent most of this summer on the river.

“Not only is river surfing fun but I love telling people I surf in Dayton.”

With so many new surfers from, and coming to, Dayton, local stores specialising in paddle and surf boards are experiencing a welcome pandemic-fuelled boom.

“They (river surfing boards) are one of our bigger sellers. They’re going out faster than we can get them in,” says Bernie Farley, co-owner of Whitewater Warehouse, perched on the banks of the Mad River.

Farley, one of the original driving forces behind getting the white-water features built, says sales of boards this year are up 50 to 60% on 2019.

As for the actual sport itself, river surfing is a great entry point for first-time fans of adventure water activities.

Brown recommends beginners start out on longer, wider inflatable boards, the kind used for stand-up paddle boarding, since they provide more stability on the wave. For the more experienced surfers and for when the wave level falls, shorter boards are recommended.

Unlike its ocean equivalent, which experts say requires more patience and can be time-consuming, river surfing sees surfers enter directly from the side and immediately get on the wave.

Also unlike ocean surfing, once surfers do fall into the water, it only takes a few minutes to swim back to the wave and get back on the board again. That said, adds Brown, “Once you stand up and start turning (on the wave), it feels very similar to ocean surfing.”

As temperatures begin to drop over the next few weeks, the curtains are set to come down on Dayton’s best ever river surfing season. But virus or not, fans say they’re only getting started.

“It has created a community of people,” says Kathleen Hartshorn. “It’s such a unique thing to say we do in Dayton, Ohio.”